You may neglect to take precautions when hiring a contractor, if you hire someone who does not get the project done in a reasonable time and who is not professional and may deliver bad job, as a rule are plain scammers, who seizes the opportunity to make easy

Contractor fraud often costs the victim twice at the end, because then you have to pay a legitimate firm again to bring the work up to standard or repair the damage.

Contractor Fraud – illegal business practices committed by firms hired to repair, reform, renovate or build housing and properties. Contractor fraud is typically carried out by smallfirms assuring rapid repairs or upgrades in short times and for lower market prices. The work is usually poor quality, redundant or may even cause damage to previously undamaged parts of a residence. The victim of contractor fraud is often pressured into paying for the work through threats and intimidation.

Tips to Avoid Becoming a Victim of Contractor Fraud

END_OF_DOCUMENT_TOKEN_TO_BE_REPLACED

It is illegal to take the life of another, despite the prevailing circumstances it is called homicide. Homicides are all killings of humans which violate criminal laws including murder and manslaughter. The most serious criminal homicide is the first degree murder. This means that the killing was intentional and planned, the killer had enough time to form a conscious intent to kill. If someone planned on killing one victim, but accidentally killed someone else, the murder is still regarded as intentional. A first degree murder can also include “malice aforethought“, that means causing great bodily harm before killing a person.

Manslaughter means taking the life of a human without having a malicious intent or planning it. It is also called a reckless killing or a killing done in the heat of the moment. A manslaughter can be involuntary when the death occurs during a commission of a non-felony (i.e. reckless driving). Voluntary manslaughter includes killing in the heat of passion or while committing a felony.

END_OF_DOCUMENT_TOKEN_TO_BE_REPLACED

Sexual abuse is any sort of non-consensual sexual contact that can happen to men or women of any age.

Sexual Abuse actions can include the following:

END_OF_DOCUMENT_TOKEN_TO_BE_REPLACED

Restraining order or also called order of protection is a form of a legal injunction that requires a party to do, or to refrain from doing, certain acts.

END_OF_DOCUMENT_TOKEN_TO_BE_REPLACED 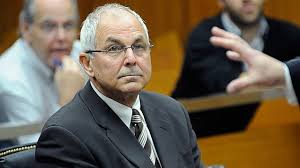 Peter Madoff is the younger brother of Bernie Madoff who was sentenced on June 29, 2009 to 150 years in Federal Prison for masterminding one of the largest Ponzi Schemes in history.  Principle losses to investors were nearly $20 Billion.  Including recorded fictional investment gains, investors lost close to $65 billion.

The sentence imposed on Bernie Madoff by Federal District Judge Denny Chin was nearly three times longer than what had been recommended by the federal probation office and more than ten times longer than that requested by Mr. Madoff’s defense lawyers.  At the time of sentencing, Judge Chin condemned Mr. Madoff’s crimes as being “extroadinarily evil”.

Now in what may very well be the final chapter in a painful saga that began on December 10, 2008 when Madoff’s sons told authorities that their father had confessed to them that the asset management unit of his firm was a massive Ponzi scheme, Peter Madoff will stand before Swain to learn his fate.

The question that needs to be answered by the sentenced that will be imposed on Thursday by Judge Swain is whether Peter Madoff is a victim or a villain.  Keeping in mind that Peter Madoff has already pleaded guilty to one count of conspiracy to violate various federal statutes and one count of falsifying books and records of an investment adviser, the Sentencing Memorandum submitted by defense counsel portrays Peter Madoff as another victim who was duped by his older brother’s Ponzi Scheme. Under his Plea Agreement, Mr. Madoff has agreed to accept a minimum sentence of no less than ten years in federal prison.

In the Draft Sentencing Report, it was reported that Peter Madoff had only learned of his brother’s Ponzi Scheme on December 9, 2008, a few days before it had been disclosed to the world.  Peter Madoff’s attorneys described him as being in shock and realizing that his world had been destroyed by the loss of his reputation and any future ability to support his family financially.  They further reported that Peter Madoff had been reviled by strangers, as well as former friends who all assumed that he must have had full and complete knowledge of Bernie Madoff’s Ponzi Scheme.

Peter is described by his attorneys as being someone who believed that his older brother was a brilliant securities trader. As a result, he encouraged his own family to invest millions of dollars into accounts that were managed by Bernie Madoff.  The fraud committed by Bernie Madoff resulted in Peter’s wife losing millions of dollars in her Madoff account, as well as his daughter, granddaughter, sister and other relatives also suffering significant losses.

Mr. Madoff’s attorneys state: “Moreover, at the time of his plea this past June, Peter Madoff consented to a Draconian forfeiture order that in one stroke stripped him of all existing assets, his home, his pension, his savings, his personal property, etc. and all future assets and income should he even have the opportunity to earn any income after serving his prison sentence.  After a lifetime of hard work, this man has been denied the ability to even collect social security”.

The facts, as presented in the Sentencing Memorandum, are as follows:

The list of disclosures contained in the Sentencing Report goes on and on.  It makes for very fascinating reading.  It will be very interesting to see what kind of sentence Judge Swain will impose on Thursday.  Will she take the same hard line position imposed by Judge Chin when older brother Bernie was sentenced or will she buy the fact that Peter was duped by his older brother?  Stay tuned as Thursday is only a few days away.