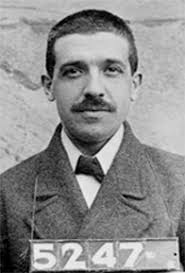 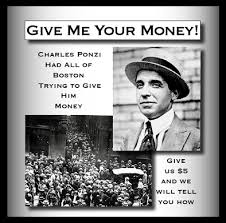 Investopedia defines a Ponzi Scheme as A fraudulent investing scam promising high rates of return with little risk to investors. The Ponzi scheme generates returns for older investors by acquiring new investors. This scam actually yields the promised returns to earlier investors, as long as there are more new investors. These schemes usually collapse on themselves when the new investments stop.

Have you ever wondered where the name Ponzi Scheme came from?  Carlo Pietro Giovanni Guglielmo Tebaldo Ponzi, better known as Charles Ponzi, was born in Lugo, Italy in 1882.  He attended the University of Rome La Sapienza and then immigrated to the United States.

On November 15, 1903, Ponzi arrived in Boston aboard the SS Vancouver. he had $2.51 in his pocket after having gambled away the rest of his life savings on the voyage.  Mr. Ponzi is quoted as saying:

“I landed in this country with $2.50 in cash and $1 million in hopes, and those hopes never left me,”

Ponzi quickly learned English and started out working odd jobs, including as a dishwasher in a restaurant  where he slept on the floor. He managed to work his way up to the position of waiter, but was fired for shortchanging the customers and theft.

In 1907, he moved to Montreal, where he found a job as a teller at Bank Zarossi. The bank was formed to cater to the new Italian immigrant population, charging high interest rates. Zarossi paid 6% interest on bank deposits – double the going rate at the time – and was growing rapidly as a result. Ponzi eventually rose to bank manager. However, he found out that the bank was in serious financial trouble because of bad real estate loans, and that Zarossi was funding the interest payments not through profit on investments, but by using money deposited in newly opened accounts. The bank eventually failed and Zarossi fled to Mexico with a large portion of the bank’s money.

Ponzi later walked into the offices of a former Zarossi customer Canadian Warehousing and, finding no one there, wrote himself a check for $423.58 in a checkbook he found, forging the signature of a director of the company, Damien Fournier. Confronted by police who had taken note of his large expenditures just after the forged check was cashed, Ponzi held out his hands wrist up and said “I’m guilty.” He ended up spending three years in the prison St. Vincent-de-Paul near Montreal. Rather than inform his mother of this development, he posted her a letter stating that he had found a job as a “special assistant” to a prison warden.

After his release in 1911 he decided to return to the United States, but got involved in a scheme to smuggle Italian illegal immigrants across the border. He was caught and spent two years in the Atlanta Prison.  After being released from prison and getting married in 1918, Ponzi stumbled across an opportunity that would form the basis of his Ponzi Scheme.

After Ponzi’s release from prison, he made his way back to Boston. There he met Rose Maria Gnecco, a stenographer, to whom he proposed marriage. Though Ponzi did not tell Gnecco about his years in jail, his mother sent Gnecco a letter telling her of Ponzi’s past. Nonetheless, she married him in 1918. For the next few months, he worked at a number of businesses, including his father-in-law’s grocery, before hitting upon an idea to sell advertising in a large business listing to be sent to various businesses. Ponzi was unable to sell this idea to businesses, and his company failed soon after.

A few weeks later, Ponzi received a letter from a company in Spain asking about the catalog. Inside the envelope was an International Reply Coupon (IRC).  An international reply coupon (IRC) is a coupon that can be exchanged for one or more postage stamps representing the minimum postage for an unregistered priority airmail letter of up to twenty grams sent to another Universal Postal Union (UPU) member country.

The purpose of the IRC is to allow a person to send someone in another country a letter, along with the cost of postage for a reply. If the addressee is within the same country, there is no need for an IRC because a self addressed stamped envelope or return postcard will be sufficient.  If the addressee is in another country, an IRC removes the need to acquire foreign postage or sending the appropriate amount of currency.

Seeing an opportunity to capitalize on this arbitrage, Ponzi quit his job as a translator; borrowed money and sent it back to his relatives in Italy requesting that they purchase postal coupons and send them to him in the United States.  Despite running into significant problems when trying to redeem these coupons, Ponzi went to several of his friends in Boston and promised that he would double their investment in 90 days. The great returns available from postal reply coupons, he explained to them, made such incredible profits easy. Some people invested and were paid off as promised, receiving $750 interest on initial investments of $1,250.

Ponzi wasted no time in expanding his operation by forming the Securities Exchange Company.  Word spread, and investments came in at an ever-increasing rate. Ponzi hired agents and paid them generous commissions for every dollar they brought in. By February 1920, Ponzi’s total take was US$5,000, (approximately US$54,000 in 2010 dollars). By March, he had made $30,000 ($324,000 in 2010 terms). A frenzy was building, and Ponzi began to hire agents to take in money from all over New England and New Jersey. At that time, investors were being paid impressive rates, encouraging others to invest. By May 1920, he had made $420,000 ($4.53 million in 2010 terms). By July 1920, he had made millions. People were mortgaging their homes and investing their life savings. Most did not take their profits, but reinvested.

Ponzi’s rapid rise naturally drew suspicion. When a Boston financial writer suggested there was no way Ponzi could legally deliver such high returns in a short period of time, Ponzi sued for libel and won $500,000 in damages. As libel law in those days placed the burden of proof on the writer and the paper, this effectively neutralized any serious probes into his dealings for some time.

Nonetheless, there were still signs of his eventual ruin. Joseph Daniels, a Boston furniture dealer who had given Ponzi furniture which he could not afford to pay for, sued Ponzi to cash in on the gold rush. The lawsuit was unsuccessful, but it did start people asking how Ponzi could have gone from being penniless to being a millionaire in so short a time. There was a run on the Securities Exchange Company, as some investors decided to pull out. Ponzi paid them and the run stopped. On July 24, 1920, the Boston Post printed a favorable article on Ponzi and his scheme that brought in investors faster than ever. At that time, Ponzi was making $250,000 a day. Ponzi’s good fortune was increased by the fact that just below this favorable article, which seemed to imply that Ponzi was indeed returning 50% return on investment after only 45 days, was a bank advertisement that stated that the bank was paying 5% returns annually. The next business day after this article was published, Ponzi arrived at his office to find thousands of Bostonians waiting to give him their money.

Ponzi’s good fortune quickly faded as the Boston Post continued to investigate his operations. On July 26, 1920, the Post ran a series of articles that raised some very serious questions about his operations.  The Post contacted Clarence Barron, the financial analyst who published the Barron’s financial paper, to help them investigate Ponzi’s scheme.

The first red flag raised was despite the fact that Ponzi offered incredible investment returns on investments, Mr. Ponzi was not investing his own money with the Company.  Barron calculated that based on the number of investments that had been made with the Securities Exchange Company, there would have had to have been 160 million postal reply coupons in circulation.  Barron’s investigation revealed that only 27,000 coupons were actually in circulation.

These disturbing facts reported by the Post caused an investor run on the Securities Exchange Company and forced Ponzi to pay out $2 million in three days to a wild and rowdy crowd gathered outside of his office.  Ponzi’s downfall was when he hired William McMasters as a publicity agent to help get himself out of trouble.

McMasters became extremely suspicious of Ponzi’s activities and began his own investigation. He found several incriminating documents indicating that Ponzi was using new investor money to pay other investors. In fact, he later described Ponzi as a financial idiot who could not even handle simple math.

On August 2, 1920, McMasters wrote an article for the Post declaring Ponzi hopelessly insolvent. The article claimed that while Ponzi claimed $7 million in liquid funds, he was actually at least $2 million in debt. With interest factored in, McMasters wrote, Ponzi was as much as $4.5 million in the red. The story touched off a massive run, and Ponzi paid off in one day. He then sped up plans to build a massive conglomerate that would engage in banking and import-export operations.

Massachusetts Bank Commissioner Joseph Allen launched an investigation into Ponzi’s banking practices found nothing illegal.  Never-the-less, Allen was afraid that if major withdrawals exhausted Ponzi’s reserves, it would bring Boston’s banking system to its knees. When Allen found out a large number of Ponzi-controlled accounts had received more than $250,000 in loans, he ordered two bank examiners to keep an eye on Ponzi’s accounts. On August 9, they reported that enough investors had cashed their checks on Ponzi’s main account there that it was almost certainly overdrawn. Allen then ordered Hanover Trust not to pay out any more checks from Ponzi’s main account. He also orchestrated an involuntary bankruptcy filing by several small Ponzi investors. The move forced Massachusetts Attorney General J. Weston Allen to release a statement that there was little to support Ponzi’s claims of large-scale dealings in postal coupons. State officials then invited Ponzi note holders to come to the Massachusetts State House to furnish their names and addresses for the purpose of the investigation. On the same day, Ponzi received a preview of Pride’s audit, which revealed Ponzi was at least $7 million in debt.

On August 11, everything came crashing down for Ponzi. First, the Post came out with a front-page story about his activities in Montreal 13 years earlier—including his forgery conviction and his role at Zarossi’s scandal-ridden bank. That afternoon, Bank Commissioner Allen seized Hanover Trust after finding numerous irregularities in its books. Although the commissioner did not know it, this move foiled Ponzi’s last-ditch plan to “borrow” funds from the bank vaults after all other efforts to obtain funds failed.

With reports that he was due to be arrested any day, Ponzi surrendered to federal authorities on August 12 and was charged with mail fraud for sending letters to his marks telling them their notes had matured. e was originally released on $25,000 bail, but after the Post released the results of the audit, the bail bondsman withdrew the bail due to concerns he might be a flight risk.

The news brought down five other banks in addition to Hanover Trust. His investors were practically wiped out, receiving less than 30 cents to the dollar. His investors lost about $20 million in 1920 dollars ($225 million in 2011 dollars)